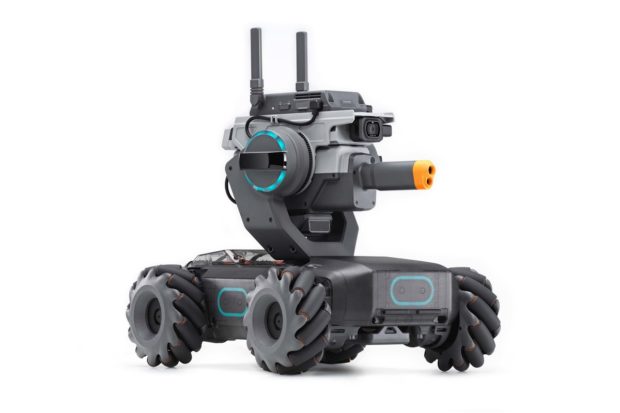 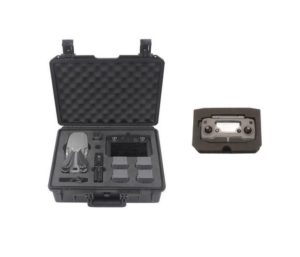 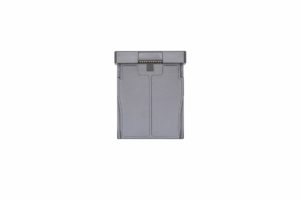 Enter the world of programming, robotics, and AI with the RoboMaster S1 Educational Robot from DJI. It’s a fun and interactive hands-on robot tank that you construct and program yourself. Play games, perform tasks, and learn valuable skills along the way.

The RoboMaster S1 is assembled from 46 customizable components. This gives you the opportunity to make the S1 your own by expanding and customizing its capabilities. Six PWM ports are included for the addition of optional accessories for even further customization.

The RoboMaster App is at the heart of experiencing what the S1 has to offer. It gives you control of the robot and the ability to program new abilities into it. The app supports iOS, Android, and Windows devices, such as smartphones, tablets, and laptops. The multi-platform nature of the app lets different platforms to play together, as well as share custom programs.

What the RoboMaster can do is entirely up to you and how you combine the six different recognition functions. They include a combination of visual and audio recognition abilities

Line Follow: Create your own fun and interactive course for the S1 to automatically follow
Vision Markers: The S1 can recognize and react to up to 44 visual markets such as numbers, letters, and special characters
Follow: You can give the S1 the ability to track and follow a person in its field of vision
Clap: Program responses to audible clapping based on varying rhythms and quantity of claps
Hand Gestures: The S1 can respond to an array of physical hand gestures
S1 Robots: Your S1 can recognize other S1 robots and perform custom movements based on your programming

Designed to foster a programming mindset, this series of project-based courses and tasks are meant to take you from beginner to expert

The video tutorials included in the RoboAcademy are meant to deliver immersive instructions on how to control your RoboMaster S1. They are also designed to be a fun and engaging way to gain a better understanding of physics, mathematics, and basic programming

Different abilities can be programmed into the S1 to customize it to your liking. For beginners, Scratch 3.0 is a programming language that’s an excellent entry into learning logical coding concepts with a visual, block-based UI. For more advanced programmers, the RoboMaster S1 also supports the widely used Python language as well.

Using the low-latency 1080p/720p gimbal camera, you can enjoy a first-person view of the action when driving and playing games. The camera is attached to a 2-axis gimbal that features a 540° yaw and 65° pitch, for an expansive field of view. To help keep your streaming video smooth and stable, the gimbal operates on a brushless motor that works with an IMU and custom algorithms to keep vibration control accuracy to within ±0.02°.

The built-in blaster uses LED lights to track targets and opponents in a variety of gaming modes, firing either infrared beams or physical non-toxic gel beads. The bead hopper can hold approximately 430 beads at once. The inclusion of sound effects and recoil when firing help to immerse you in the experience. For added safety, the S1 features limitations on firing rate and angle.

The blaster can be used in a variety of game modes and the reactions of your S1 during gameplay can be augmented with custom coding, such as “Hit and Run”, where you can make the S1 turn and counterattack automatically once hit. Here’s a list of the game modes you can enjoy with the S1

Target Practice & Target Race: Solo gaming modes that require you to scan visual markers with the S1 and either practice firing or race from marker to marker
Race: A multiplayer mode where multiple S1 robots race to scan visual markers in sequence as fast as possible
Free-for-All: A multiplayer mode where multiple S1 robots use the integrated blaster to fire gel beads or infrared beams at each other. Additional mystery bonuses can be used to gain an advantage. They include Dizziness, Electromagnetic Interference, Extreme Speed, and Invincibility.

Six intelligent armor panels surround the tank and are designed to detect hits when going into battle with your RoboMaster S1. It can detect infrared or physical strikes from incoming gel bead ammunition. Hits are registered and communicated in real time during gameplay. Multiple LED lights on the sides of the blaster turn off one-by-one after hits, giving you a visual indication of score/damage.

The custom M3508I motor features an integrated FOC ESC and outputs torque of up to 250 mN-n. Linear Hall-effect sensors help to give you precise control over a front suspension with four-wheel drive. Each of the four Mecanum wheels has 12 rollers, allowing the RoboMaster S1 to achieve omnidirectional movement.